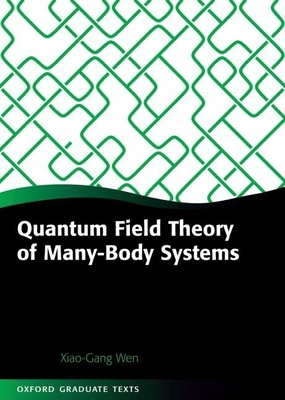 For most of the last century, condensed matter physics has been dominated by band theory and Landau's symmetry breaking theory. In the last twenty years, however, there has been the emergence of a new paradigm associated with fractionalization, topological order, emergent gauge bosons and fermions, and string condensation. These new physical concepts are so fundamental that they may even influence our understanding of the origin of light and electrons in the universe. This book is a pedagogical and systematic introduction to the new concepts and quantum field theoretical methods in condensed matter physics. It discusses many basic notions in theoretical physics, which underlie physical phenomena in nature, including a notion that unifies light and electrons. Topics covered are dissipative quantum systems, boson condensation, symmetry breaking and gapless excitations, phase transitions, Fermi liquids, spin density wave states, Fermi and fractional statistics, quantum Hall effects, topological/quantum order, spin liquid and string condensation. Methods discussed include the path integral, Green's functions, mean-field theory, effective theory, renormalization group, bosonization in one- and higher dimensions, non-linear sigma-model, quantum gauge theory, dualities, slave-boson theory, and exactly soluble models beyond one-dimension. This book is aimed at bringing students to the frontiers of research in condensed matter physics.

Xiao-Gang Wen is a professor in the Department of Physics at Massachusetts Institute of Technology.
Loading...
or
Not Currently Available for Direct Purchase