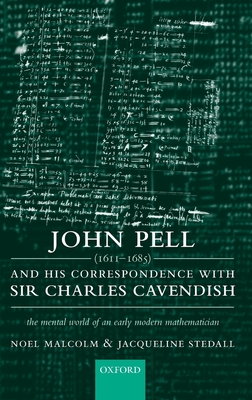 John Pell (1611-1685) and His Correspondence with Sir Charles Cavendish

Writing in 1939, the historian of mathematics Herbert Turnbull described John Pell as 'a mysterious figure' and commented: 'he may well prove to be an unsuspected genius, for his manuscripts appear to survive, unexamined, in the British Museum.' Turnbull's expectations were pitched a little too high: although Pell was a man of unusual intellectual abilities, and one of the leading mathematicians of his day, his work does not merit any use of the term 'genius'. The term 'mysterious', on the other hand, was well deserved; and no less mysterious is the fact that the great majority of Pell's voluminous manuscripts have remained almost entirely unexamined for more than sixty years after Turnbull published those comments. This first full length biography of John Pell (1611-1685) by Malcolm and Stedall reconstructs the life and times of this central and enigmatic mathematician and scholar. The text consists of over 600 pages and is presented in three parts: Part 1 The life of John Pell (1611-1685) is a thoroughly researched new account of Pell's life; Part 2 The mathematics of John Pell explores Pell's contribution to mathematics; and Part 3 The Pell-Cavendish correspondence is the first complete edition of Pell's correspondence, with detailed annotations. For historians of mathematics and science, philosophers, social and political historians and early modern intellectual historians, this superb work of scholarship is essential reading.