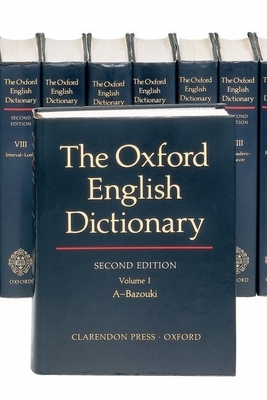 Eighty years ago, the "greatest work in dictionary-making ever undertaken" was completed. And with its enormous range, unparalleled historical depth, detailed etymologies, and inexhaustible supply of illustrative quotations, it has enriched the lives of writers, readers, and word-lovers of all stripes ever since. Begun in 1857, published in ten volumes in 1928, subsequently revised and expanded to 20 volumes in 1989, and now adopted to the electronic age, the OED has become the most venerated and most beloved English-language reference ever compiled. The key feature of the OED, of course, is its unique historical focus. Accompanying each definition is a chronologically arranged group of quotations that illustrate the evolution of meaning from the word's first recorded usage and show the contexts in which it can be used. The quotations are drawn from a huge variety of sources--literary, scholarly, technical, popular-and represent authors as disparate as Geoffrey Chaucer and Erica Jong, William Shakespeare and Raymond Chandler, Charles Darwin and John Le Carre. In all, nearly 2.5 million quotations--illustrating over a half-million words--can be found in the OED. Other features distinguishing the entries in the dictionary are the most authoritative definitions, detailed information on pronunciation, variant spellings throughout each word's history, extensive treatment of etymology, and details of area of usage and of any regional characteristics (including geographical origins). A dictionary like no other in the world, the OED has been described as "among the wonders of the world of scholarship." Reflecting upon the Dictionary's 80 years, that statement is today more apt than it ever has been. Also available online at: www.oed.com

J. A. Simpson worked on the Supplement to the Oxford English Dictionary and prepared the Concise Oxford Dictionary of Proverbs, which was published in 1982. E. S. C. Weiner also served on the editorial staff of the Supplement and compiled the Oxford Guide to English Usage, which was published in 1983.
or support indie stores by buying on
Copyright © 2020 American Booksellers Association