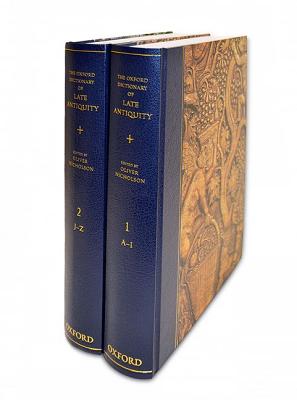 The Oxford Dictionary of Late Antiquity

The Oxford Dictionary of Late Antiquity is the first comprehensive reference book covering every aspect of history, culture, religion, and life in Europe, the Mediterranean, and the Near East (including the Persian Empire and Central Asia) between the mid-3rd and the mid-8th centuries AD, the era now generally known as Late Antiquity. This period saw the re-establishment of the Roman Empire, its conversion to Christianity and its replacement in the West by Germanic kingdoms, the continuing Roman Empire in the Eastern Mediterranean, the Persian Sassanian Empire, and the rise of Islam. Consisting of more than one million words in more than 5,000 A-Z entries, and written by more than 400 contributors, it is the long-awaited middle volume of a series, bridging a significant period of history between those covered by the acclaimed Oxford Classical Dictionary and The Oxford Dictionary of the Middle Ages. The scope of the Dictionary is broad and multi-disciplinary; across the wide geographical span covered (from Western Europe and the Mediterranean as far as the Near East and Central Asia), it provides succinct and pertinent information on political history, law, and administration; military history; religion and philosophy; education; social and economic history; material culture; art and architecture; science; literature; and many other areas. Drawing on the latest scholarship, and with a formidable international team of advisers and contributors, The Oxford Dictionary of Late Antiquity aims to establish itself as the essential reference companion to a period that is attracting increasing attention from scholars and students worldwide.

Oliver Nicholson was an Associate Professor in the Department of Classical and Near Eastern Studies at the University of Minnesota and taught courses on post-classical Latin authors as well as a sequence of undergraduate courses on the Age of Constantine the Great, of Saint Augustine of Hippo, and of Justinian and Muhammad, for which he has won a few teaching awards. From 1995--2000 he was the Director of the Center for Mediaeval Studies. He has published widely, especially on Lactantius and the Age of Constantine the Great.
Loading...
or support indie stores by buying on