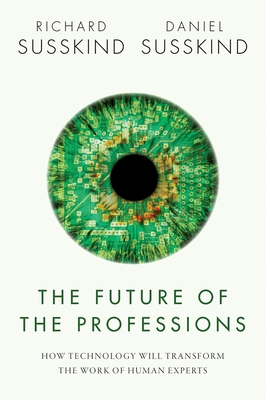 The Future of the Professions (Hardcover)

How Technology Will Transform the Work of Human Experts

This book predicts the decline of today's professions and describes the people and systems that will replace them. In an Internet society, according to Richard Susskind and Daniel Susskind, we will neither need nor want doctors, teachers, accountants, architects, the clergy, consultants, lawyers, and many others, to work as they did in the 20th century. The Future of the Professions explains how 'increasingly capable systems' -- from telepresence to artificial intelligence -- will bring fundamental change in the way that the 'practical expertise' of specialists is made available in society. The authors challenge the 'grand bargain' -- the arrangement that grants various monopolies to today's professionals. They argue that our current professions are antiquated, opaque and no longer affordable, and that the expertise of their best is enjoyed only by a few. In their place, they propose six new models for producing and distributing expertise in society. The book raises important practical and moral questions. In an era when machines can out-perform human beings at most tasks, what are the prospects for employment, who should own and control online expertise, and what tasks should be reserved exclusively for people? Based on the authors' in-depth research of more than ten professions, and illustrated by numerous examples from each, this is the first book to assess and question the relevance of the professions in the 21st century.

Professor Richard Susskind OBE is an author, speaker, and independent adviser to international professional firms and national governments. He is President of the Society for Computers and Law, Strategy and Technology Adviser to the Lord Chief Justice of England, and Chair of the Advisory Board of the Oxford Internet Institute. His numerous books include the best-sellers, The End of Lawyers? (OUP, 2008) and Tomorrow's Lawyers (OUP, 2013), his work has been translated into more than 10 languages, and he has been invited to speak in over 40 countries. Daniel Susskind is a Fellow of Balliol College, Oxford, from where he has two degrees in economics. Previously, he worked for the British Government - in the Prime Minister's Strategy Unit, in the Policy Unit in 10 Downing Street, and as a Senior Policy Adviser at the Cabinet Office. He was a Kennedy Scholar at Harvard University.
or support indie stores by buying on
Copyright © 2020 American Booksellers Association