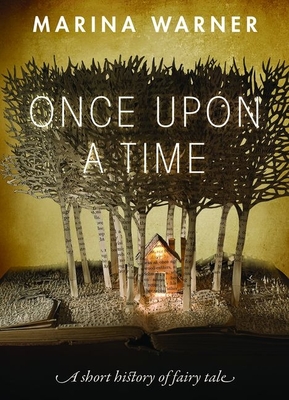 Once Upon a Time

A Short History of Fairy Tale

From wicked queens, beautiful princesses, elves, monsters, and goblins to giants, glass slippers, poisoned apples, magic keys, and mirrors, the characters and images of fairy tales have cast a spell over readers and audiences, both adults and children, for centuries. These fantastic stories have travelled across cultural borders and been passed on from generation to generation, ever-changing, renewed with each re-telling. Few forms of literature have greater power to enchant us and rekindle our imagination than a fairy tale. But what is a fairy tale? Where do they come from and what do they mean? What do they try and communicate to us about morality, sexuality, and society? The range of fairy tales stretches across great distances and time; their history is entangled with folklore and myth and their inspiration draws on ideas about nature and the supernatural, imagination and fantasy, psychoanalysis, and feminism. Marina Warner has loved fairy tales over a long writing life and in Once Upon a Time, she explores a multitude of tales through the ages, their different manifestations on the page, the stage, and the screen. From the phenomenal rise of Victorian and Edwardian literature to contemporary children's stories, Warner unfolds a glittering array of examples, from classics such as Red Riding Hood, Cinderella, and The Sleeping Beauty, the Grimm Brothers' Hansel and Gretel, and Hans Andersen's The Little Mermaid, to modern-day realizations including Walt Disney's Snow White and gothic interpretations such as Pan's Labyrinth. In 10 succinct chapters, Marina Warner digs into a rich hoard of fairy tales in their brilliant and fantastical variations in order to define a genre and evaluate a literary form that keeps shifting through time and history. Her book makes a persuasive case for fairy tale as a crucial repository of human understanding and culture.

Marina Warner's award-winning studies of mythology and fairy tales include Alone of All Her Sex: The Myth and the Cult of the Virgin Mary, Stranger Magic: Charmed States & the Arabian Nights, From the Beast to the Blonde - on Fairy Tales and their Tellers, Monuments & Maidens: The Allegory of the Female Form, and No Go the Bogeyman: Scaring, Lulling and Making Mock. Her Clarendon Lectures Fantastic Metamorphoses, Other Worlds were published in 2001. In 2015, she was awarded the Holberg Prize and in 2013, she was awarded a Sheykh Zayed Prize and the Truman Capote Award. She was awarded a CBE for services to Literature in 2008. She is a Fellow of All Souls College, Oxford, an Honorary Fellow of Lady Margaret Hall, Oxford, and a Fellow of the Royal Society of Literature and the British Academy.
Loading...
or
Not Currently Available for Direct Purchase