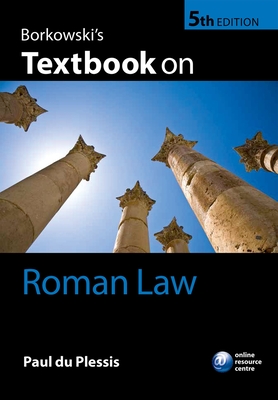 Borkowski's Textbook on Roman Law is the leading textbook in the field of Roman law, and has been written with undergraduate students firmly in mind. The book provides an accessible and highly engaging account of Roman private law and civil procedure, with coverage of all key topics, including the Roman legal system, and the law of persons, property, and obligations. The author sets the law in its social and historical context, and demonstrates the impact of Roman law on our modern legal systems. For the fifth edition, Paul du Plessis has included references to a wide range of scholarly texts, to ground his judicious account of Roman law firmly in contemporary scholarship. He has also added examples from legal practice, as well as truncated timelines at the start of each chapter to illustrate how the law developed over time. The book contains a wealth of learning features, including chapter summaries, diagrams and maps. A major feature of the book is the inclusion throughout of extracts in translation from the most important sources of Roman law: the Digest and the Institutes of Justinian. Annotated further reading sections at the end of each chapter act as a guide to further enquiry. Online Resource Centre The book is accompanied by an extensive Online Resource Centre, containing the following resources: -Self-test multiple choice questions
-Interactive timeline
-Biographies of key figures
-Glossary of Latin terms
-Annotated web links
-Original Latin versions of the extracts from the Digest and the Institutes of Justinian
-Examples of textual analysis of Roman law texts
-Guide to the literature and sources of Roman law.

Paul du Plessis, Senior Lecturer in Civil Law and Legal History, University of Edinburgh Paul du Plessis is a Senior Lecturer in Law at Edinburgh University. His research interests include letting and hiring in Roman law and the development of the European ius commune. He is a member of various organizations dedicated to the study of legal history, and holds the positions of webmaster of the Centre for Legal History at Edinburgh University and convener of the Edinburgh Roman Law Group. He is a founding member of the International Advisory Board of the Alan Watson Foundation, hosted by the University of Belgrade. In 2012, he was elected Fellow of the Royal Historical Society.
or
Not Currently Available for Direct Purchase
Copyright © 2020 American Booksellers Association