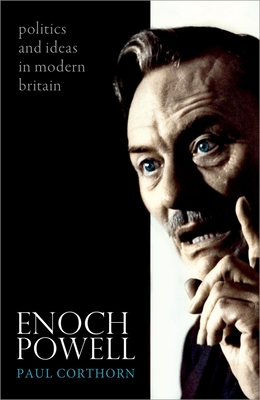 Politics and Ideas in Modern Britain

Best known for his notorious 'Rivers of Blood' speech in 1968 and his outspoken opposition to immigration, Enoch Powell was one of the most controversial figures in British political life in the second half of the twentieth century and a formative influence on what came to be known as Thatcherism. Telling the story of Powell's political life from the 1950s onwards, Paul Corthorn's intellectual biography goes beyond a fixation on the 'Rivers of Blood' speech to bring us a man who thought deeply about--and often took highly unusual (and sometimes apparently contradictory) positions on--the central political debates of the post-1945 era: rejecting the Cold War emphasis on the Anglo-American relationship (and at one stage going so far as to advocate the idea of an alliance with the Soviet Union); promoting free-market economics long before it was fashionable, while remaining a staunch defender of the National Health Service; vehemently opposing British membership of the European Community; arguing for the closer integration of Northern Ireland with the rest of the UK; and in the 1980s supporting unilateral nuclear disarmament. In the process, Powell emerges as more than just a deeply divisive figure but as a seminal political intellectual of his time. Paying particular attention to the revealing inconsistencies in Powell's thought and the significant ways in which his thinking changed over time, Corthorn argues that Powell's diverse campaigns can nonetheless still be understood as a coherent whole, if viewed as part of a long-running, and wide-ranging, debate set against the backdrop of the long-term decline in Britain's international, military, and economic position in the decades after 1945.

Paul Corthorn is a Reader in Modern British History at Queen's University Belfast. He has published widely on twentieth century British political history, including In the Shadow of the Dictators: The British Left in the 1930s (2006) and The British Labour Party and the Wider World: Domestic Politics, Internationalism and Foreign Policy (2008), co-edited with Jonathan Davis. He lives in Belfast with his family.
or
Not Currently Available for Direct Purchase