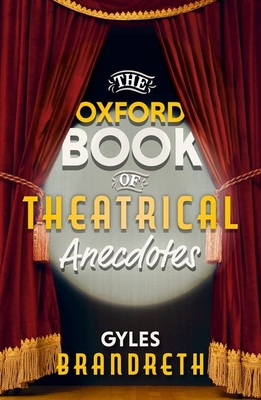 The Oxford Book of Theatrical Anecdotes

This is the ultimate anthology of theatrical anecdotes, edited by lifelong theatre-lover Gyles Brandreth in the Oxford tradition, and covering every kind of theatrical story and experience from the age of Shakespeare and Marlowe to the age of Stoppard and Mamet, from Richard Burbage to Richard Briers, from Nell Gwynn to Daniel Day-Lewis, from Sarah Bernhardt to Judi Dench. Players, playwrights, prompters, producers--they all feature. The Oxford Book of Theatrical Anecdotes provides a comprehensive, revealing, and hugely entertaining portrait of the world of theatre across four hundred years. Many of the anecdotes are humorous: all have something pertinent and illuminating to say about an aspect of theatrical life--whether it is the art of playwriting, the craft of covering up missed cues, the drama of the First Night, the nightmare of touring, or the secret ingredients of star quality. Edmund Kean, Henry Irving, John Gielgud, Laurence Olivier, Ellen Terry, Edith Evans, Maggie Smith, Helen Mirren--the great 'names' are all here, of course, but there are tales of the unexpected, too--and the unknown. This is a book--presented in five acts, with a suitably anecdotal and personal prologue from Gyles Brandreth--where, once in a while, the understudy takes centre-stage and Gyles Brandreth treats triumph and disaster just the same, including stories from the tattiest touring companies as well as from Broadway, the West End and theatres, large and small, in Australia, India, and across Europe.

Gyles Brandreth is a writer, broadcaster, and former MP who, over forty years, has worked in the theatre as an actor and producer. On stage he has appeared in pantomime, in Shakespeare, in The Importance of Being Earnest, and in his own musical revue in the West End. In Edinburgh he has won the Most Popular Show at the Fringe Award and multiple 5 star reviews and taken his acclaimed one-man show to more than a hundred UK theatres. On stage, radio, TV, and in print he has interviewed most of the leading theatre personalities of our time. His books include a history of pantomime and biographies of Sir John Gielgud and Dan Leno. Best known as a reporter on The One Show on BBC1 and a regular on Radio 4's Just A Minute, he has appeared on Have I Got News For You, QI and Countdown. He is the editor of the Oxford Book of Humorous Quotations, president of the Oscar Wilde Society, founder of the national Poetry Together project, and Chancellor of the University of Chester.
Loading...
or support indie stores by buying on
(This book is on backorder)