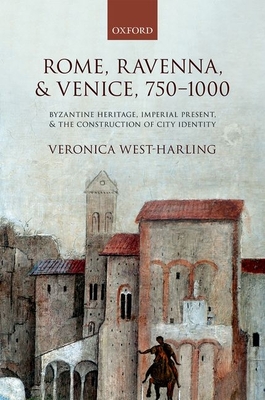 Byzantine Heritage, Imperial Present, and the Construction of City Identity

The richest and most politically complex regions in Italy in the earliest middle ages were the Byzantine sections of the peninsula, thanks to their links with the most coherent early medieval state, the Byzantine empire. This comparative study of the histories of Rome, Ravenna, and Venice examines their common Byzantine past, since all three escaped incorporation into the Lombard kingdom in the late 7th and early 8th centuries. By 750, however, Rome and Ravenna's political links with the Byzantine Empire had been irrevocably severed. Thus, did these cities remain socially and culturally heirs of Byzantium? How did their political structures, social organisation, material culture, and identities change? Did they become part of the Western political and ideological framework of Italy? This stusy identifies and analyses the ways in which each of these cities preserved the structures of the Late Antique social and cultural world; or in which they adapted each and every element available to them to their own needs, at various times and in various ways, to create a new identity based partly on their Roman heritage and partly on their growing integration with the rest of medieval Italy. It tells a story which encompasses the main contemporary narratives, documentary evidence, recent archaeological discoveries, and discussions on art history; it follows the markers of status and identity through titles, names, ethnic groups, liturgy and ritual, foundation myths, representations, symbols, and topographies of power to shed light on a relatively little known area of early medieval Italian history.

Veronica West-Harling, Research Associate, University of Oxford Veronica West-Harling is a Research Associate of the History Faculty at the University Oxford and is currently a Visiting Professor at the Universita Ca'Foscari in Venice. She has studied at the Paris IV-Sorbonne, Brasenose College, Oxford, and Trinity College, Cambridge. She began her professional career as a Junior Research Fellow at Oxford, where she won a British Academy Postdoctoral Fellowship, later becoming a lecturer in Durham and Wales and a Senior Lecturer at Northampton. In 2011, together with Chris Wickham, she received an AHRC grant for 3 years, of which 9 months were spent in Italy as a Visiting Fellow in Venice and at Roma La Sapienza. In 2015 she won a Marie Curie Fellowship, which supports her current role in Venice.
Loading...
or
Not Currently Available for Direct Purchase