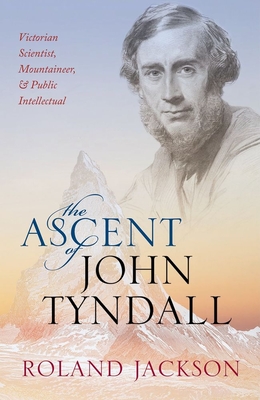 The Ascent of John Tyndall

Rising from a humble background in rural southern Ireland, John Tyndall became one of the foremost physicists, communicators of science, and polemicists in mid-Victorian Britain. In science, he is known for his important work in meteorology, climate science, magnetism, acoustics, and bacteriology. His discoveries include the physical basis of the warming of the Earth's atmosphere (the basis of the greenhouse effect), and establishing why the sky is blue. But he was also a leading communicator of science, drawing great crowds to his lectures at the Royal Institution, while also playing an active role in the Royal Society. Tyndall moved in the highest social and intellectual circles. A friend of Tennyson and Carlyle, as well as Michael Faraday and Thomas Huxley, Tyndall was one of the most visible advocates of a scientific world view as tensions grew between developing scientific knowledge and theology. He was an active and often controversial commentator, through letters, essays, speeches, and debates, on the scientific, political, and social issues of the day, with strongly stated views on Ireland, religion, race, and the role of women. Widely read in America, his lecture tour there in 1872-73 was a great success. Roland Jackson paints a picture of an individual at the heart of Victorian science and society. He also describes Tyndall's importance as a pioneering mountaineer in what has become known as the Golden Age of Alpinism. Among other feats, Tyndall was the first to traverse the Matterhorn. He presents Tyndall as a complex personality, full of contrasts, with his intense sense of duty, his deep love of poetry, his generosity to friends and his combativeness, his persistent ill-health alongside great physical stamina driving him to his mountaineering feats. Drawing on Tyndall's letters and journals for this first major biography of Tyndall since 1945, Jackson explores the legacy of a man who aroused strong opinions, strong loyalties, and strong enmities throughout his life.

Roland Jackson is a historian of science, with interests also in contemporary science and innovation policy, and in bioethics. His recent posts include: Head of the Science Museum, London; Chief Executive of the British Science Association; and Executive Chair of Sciencewise. He is a General Editor of The Correspondence of John Tyndall, being published in 19 volumes by the Royal Institution.
Loading...
or
Not Currently Available for Direct Purchase