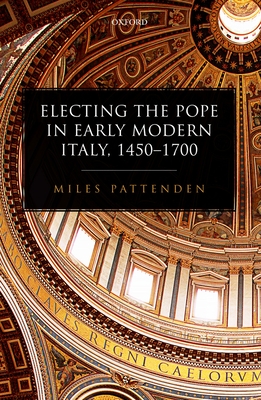 Electing the Pope in Early Modern Italy, 1450-1700 offers a radical reassessment of the history of early modern papacy, constructed through the first major analytical treatment of papal elections in English. Papal elections, with their ceremonial pomp and high drama, are compelling theater,
but, until now, no one has analyzed them on the basis of the problems they created for cardinals: how were they to agree rules and enforce them? How should they manage the interregnum? How did they decide for whom to vote? How was the new pope to assert himself over a group of men who, until just
moments before, had been his equals and peers? This study traces how the cardinals' responses to these problems evolved over the period from Martin V's return to Rome in 1420 to Pius VI's departure from it in 1798, placing them in the context of the papacy's wider institutional developments. Miles Pattenden argues not only that the elective
nature of the papal office was crucial to how papal history unfolded but also that the cardinals of the fifteenth to eighteenth centuries present us with a unique case study for observing the approaches to decision-making and problem-solving within an elite political group.

Miles Pattenden, a Research Fellow at Wolfson College, Oxford, is a historian of Early Modern Catholicism. He is the author of Pius IV and the Fall of the Carafa: Nepotism and Papal Authority in Counter-Reformation Rome (OUP, 2013) and the co-editor of several volumes, including The Spanish Presencein Sixteenth-Century Italy (2015) and The Companion to the Early Modern Cardinal (forthcoming).
Loading...
or
Not Currently Available for Direct Purchase