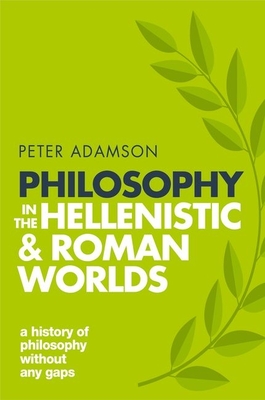 Philosophy in the Hellenistic and Roman Worlds

A History of Philosophy Without Any Gaps, Volume 2

Peter Adamson's History of Philosophy without any gaps series of podcasts is one of the most ambitious educational works on the web. It aims to do nothing less than take listeners through the entire history of philosophy 'without any gaps'. It assumes no prior knowledge making it ideal for beginners. This is the second volume to make these witty, and highly accessible, podcasts available in book form. Philosophy in the Hellenistic and Roman Worlds offers a tour through a period of eight hundred years when some of the most influential of all schools of thought were formed. From the counter-cultural witticisms of Diogenes the Cynic to the political philosophy of Augustine, the book gathers together all aspects of later ancient thought in a way that is a pleasure to read.

Peter Adamson took his doctorate from the University of Notre Dame and first worked at King's College London. In 2012 he moved to the Ludwig-Maximilians-Universitat Munchen, where he is Professor of Late Ancient and Arabic Philosophy. He has published widely in ancient and medieval philosophy, especially on Neoplatonism and on philosophy in the Islamic world.
Loading...
or
Not Currently Available for Direct Purchase