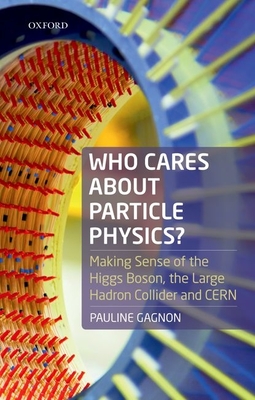 Who Cares about Particle Physics?

Making Sense of the Higgs Boson, the Large Hadron Collider and Cern

CERN, the European Laboratory for particle physics, regularly makes the news. What kind of research happens at this international laboratory and how does it impact people's daily lives? Why is the discovery of the Higgs boson so important? Particle physics describes all matter found on Earth, in stars and all galaxies but it also tries to go beyond what is known to describe dark matter, a form of matter five times more prevalent than the known, regular matter. How do we know this mysterious dark matter exists and is there a chance it will be discovered soon? About sixty countries contributed to the construction of the gigantic Large Hadron Collider (LHC) at CERN and its immense detectors. Dive in to discover how international teams of researchers work together to push scientific knowledge forward. Here is a book written for every person who wishes to learn a little more about particle physics, without requiring prior scientific knowledge. It starts from the basics to build a solid understanding of current research in particle physics. A good dose of curiosity is all one will need to discover a whole world that spans from the infinitesimally small and stretches to the infinitely large, and where imminent discoveries could mark the dawn of a huge revolution in the current conception of the material world.

Pauline Gagnon, formerly Senior Research Scientist, Indiana University, USA (retired) Pauline Gagnon was born in Quebec, Canada. After teaching physics for a few years in local colleges, she moved to California, where she completed a PhD in particle physics at University of California in Santa Cruz in 1993. She then started doing research at CERN, the European Laboratory for Particle Physics and is now a Senior Research Scientist at Indiana University. Since 2012, Pauline Gagnon has devoted all her time to popular science activities. In her own words, particle physics is too much fun to leave it only to physicists.
Loading...
or
Not Currently Available for Direct Purchase