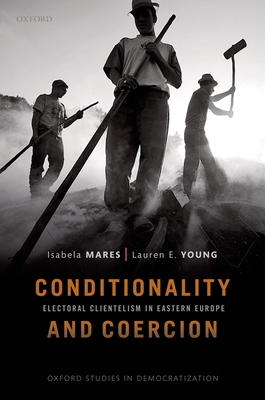 In many recent democracies, candidates compete for office using illegal strategies to influence voters. In Hungary and Romania, local actors including mayors and bureaucrats offer access to social policy benefits to voters who offer to support their preferred candidates, and they threaten
others with the loss of a range of policy and private benefits for voting the wrong way. These quid pro quo exchanges are often called clientelism. How can politicians and their accomplices get away with such illegal campaigning in otherwise democratic, competitive elections? When do they rely on
the worst forms of clientelism that involve threatening voters and manipulating public benefits? Conditionality and Coercion: Electoral Clientelism in Eastern Europe uses a mixed method approach to understand how illegal forms of campaigning including vote buying and electoral coercion persist in two democratic countries in the European Union. It argues that we must disaggregate clientelistic
strategies based on whether they use public or private resources, and whether they involve positive promises or negative threats and coercion. We document that the type of clientelistic strategies that candidates and brokers use varies systematically across localities based on their underlying
social coalitions. We also show that voters assess and sanction different forms of clientelism in different ways. Voters glean information about politicians' personal characteristics and their policy preferences from the clientelistic strategies these candidates deploy. Most voters judge candidates who use clientelism harshly. So how does clientelism, including its most odious coercive forms, persist in democratic systems? This book suggests that politicians can get away with clientelism by using forms of it that are in line with the policy preferences of
constituencies whose votes they need. Clientelistic and programmatic strategies are not as distinct as previous have argued. Oxford Studies in Democratization is a series for scholars and students of comparative politics and related disciplines. Volumes concentrate on the comparative study of the democratization process that accompanied the decline and termination of the cold war. The geographical focus of the series is
primarily Latin America, the Caribbean, Southern and Eastern Europe, and relevant experiences in Africa and Asia. The series editor is Laurence Whitehead, Senior Research Fellow, Nuffield College, University of Oxford.

Isabela Mares, Professor of Political Science, Yale University, Lauren E. Young, Assistant Professor of Political Science, University of California Davis Isabela Mares is Professor of Political Science at Yale University. She has written extensively on a range of topics in comparative politics and political economy, including democratization, clientelism and corruption, taxation and fiscal capacity development, social policy reforms in both developedand developing countries. She is the author of The Politics of Social Risk: Business and Welfare State Development (New York: Cambridge University Press), for which she won the Gregory Luebbert Award for best book in Comparative Politics (awarded by the American Political Science Assciation, 2004), she also won the First Best Book in European Studies award (Council for European Studies, 2004) and received an Honorable Mention from the American Political Science Association.At Yale, Isabela Mares is teaching courses in political economy, welfare state development, democratization and democratic erosion, and an interdisciplinary graduate course on Micro-historical Analysis in Comparative Research. Lauren E. Young is Assistant Professor in the Department of Political Science at UC Davis. She received her Ph.D. in political science with distinction from Columbia University and was a postdoctoral scholar at the Center for Democracy, Development and the Rule of Law (CDDRL) at Stanford, and theCenter for Global Development (CGD) (non-resident). She is a member of the Evidence in Governance and Politics (EGAP) network and a co-organizer of the California Workshop on Empirical Political Science and the 2019 WPSA Autocratic Politics pre-conference.Her research aims to understand how individuals make decisions when faced with the threat of violence. She has been published in the American Political Science Review, Annual Review of Political Science, the Journal of Peace Research, and Comparative Political Studies.
Loading...
or support indie stores by buying on