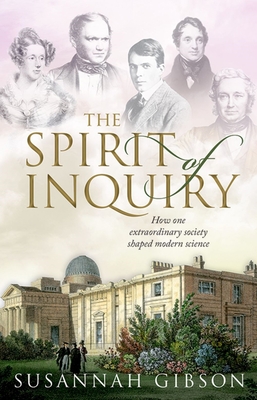 The Spirit of Inquiry

Cambridge is now world-famous as a centre of science, but it wasn't always so. Before the nineteenth century, the sciences were of little importance in the University of Cambridge. But that began to change in 1819 when two young Cambridge fellows took a geological fieldtrip to the Isle of
Wight. Adam Sedgwick and John Stevens Henslow spent their days there exploring, unearthing dazzling fossils, dreaming up elaborate theories about the formation of the earth, and bemoaning the lack of serious science in their ancient university. As they threw themselves into the exciting new science
of geology - conjuring millions of years of history from the evidence they found in the island's rocks - they also began to dream of a new scientific society for Cambridge. This society would bring together like-minded young men who wished to learn of the latest science from overseas, and would
encourage original research in Cambridge. It would be, they wrote, a society to keep alive the spirit of inquiry. Their vision was realised when they founded the Cambridge Philosophical Society later that same year. Its founders could not have imagined the impact the Cambridge Philosophical Society would have: it was responsible for the first publication of Charles Darwin's scientific writings, and hosted some
of the most heated debates about evolutionary theory in the nineteenth century; it saw the first announcement of x-ray diffraction by a young Lawrence Bragg - a technique that would revolutionise the physical, chemical and life sciences; it published the first paper by C.T.R. Wilson on his cloud
chamber - a device that opened up a previously-unimaginable world of sub-atomic particles. 200 years on from the Society's foundation, this book reflects on the achievements of Sedgwick, Henslow, their peers, and their successors. Susannah Gibson explains how Cambridge moved from what Sedgwick saw
as a death-like stagnation (really little more than a provincial training school for Church of England clergy) to being a world-leader in the sciences. And she shows how science, once a peripheral activity undertaken for interest by a small number of wealthy gentlemen, has transformed into an
enormously well-funded activity that can affect every aspect of our lives.

Dr Susannah Gibson is an Affiliated Scholar of the Department of History and Philosophy of Science at the University of Cambridge. She holds a PhD from Cambridge on the history of the life sciences of the eighteenth century, a master's degree in the history of nineteenth-century science, and abachelor's degree in experimental physics. She is the author of Animal, Vegetable, Mineral? How eighteenth-century science disrupted the natural order (OUP, 2015), which was well reviewed in The Telegraph, The TLS, and The Independent, amongst other publications. She was formerly Manager of theCambridge Literary Festival, and remains interested in both introducing new audiences to the history of science, and in bridging the gap between academic and popular writing.
Loading...
or support indie stores by buying on