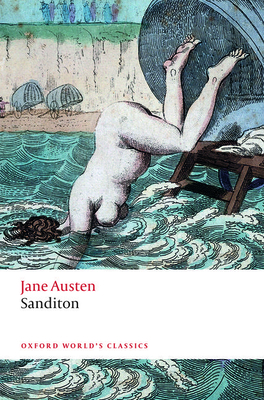 'no person could be really well . . . without spending at least six weeks by the sea every year' In Sanditon, Jane Austen writes what may well be the first seaside novel: a novel, that is, that explores the mysterious and startling transformations that a stay by the sea can work on individuals and relationships. Sanditon is a fictitious place on England's south coast and the obsession of local
landowner Mr Thomas Parker. He means to transform this humble fishing village into a fashionable health resort to rival its famous neighbours of Brighton and Eastbourne. The seaside holiday was invented in the eighteenth century, with resorts springing up along England's extensive coastline to
take advantage of the craze for salt-water bathing. For Jane Austen, a keen bather, the seaside was a place where the female body might enjoy unusual permitted freedom. In Persuasion, the novel she finished only months before she began Sanditon, the sea and coast elicit rare moments of sensuous
delight. In this her final, unfinished work, the dying writer sets aside her familiar subject matter, the country village with its settled community, for the transient and eccentric assortment of people who drift to the new resort, the town built upon sand. If the ground beneath her characters'
feet appears less secure, Austen's own vision is opening out. Light and funny, Sanditon is her most experimental and poignant work.

Jane Austen Kathryn Sutherland is the editor of Austen-Leigh's Memoir of Jane Austen and Other Family Recollections and Jane Austen's Teenage Writings for the Oxford World's Classics. She has created a digitial edition of Jane Austen's Fiction Manuscripts (2012), the print edition published by OUP in 2017. Sheis the author of Jane Austen's Textual Lives: from Aeschylus to Bollywood (OUP, 2005).
Loading...
or
Not Currently Available for Direct Purchase