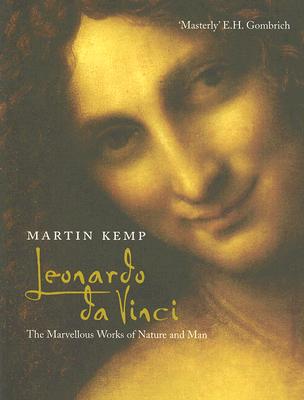 The Marvellous Works of Nature and Man

This masterly account of Leonardo da Vinci and his vision of the world has long been recognized as the classic treatment of the Renaissance giant, offering unparalleled insight into Leonardo's intellect and vision at every stage of his artistic career.
Martin Kemp, one of the world's leading authorities on Leonardo, takes us on a mesmerizing journey through the whole span of the great man's life, painting a fully integrated picture of his artistic, scientific, and technological achievements. Kemp shows how Leonardo's early training in Florence provided a crucial foundation in the "science of art," particularly perspective and anatomy, while his period in the service of the Sforzas of Milan enlarged his outlook to embrace a wide range of natural sciences and mathematics, as he searched for scientific rules governing both man and the universe. It was these rules, Kemp argues, which provided the basis for his imaginative reconstruction of nature in masterworks such as the Last Supper, The Mona Lisa, and St. John, which reveal his increasingly complex vision of man in the context of nature. And towards the end of his life, Leonardo became fascinated with the mathematics underlying the "design of nature," behind which lay the ultimate force of the "prime mover," as manifested with supreme power in his Deluge drawings.
Covering every aspect of Leonardo's achievement, generously illustrated, and now including a new introductory chapter setting Leonardo's work in its historical context, this fully updated edition provides unparalleled insight into the mind of this central figure in western art. "Sensitive and original descriptions of the master's paintings... combining the achievements of Kenneth Clark's classic on the artist with V. P. Zubov's unsurpassed account of the scientist in the context of his age."
--E. H. Gombritch, The Times Literary Supplement (on the first edition)

Martin Kemp is University Professor of the History of Art at the University of Oxford (Trinity College). The author of The Oxford History of Western Art and Leonardo, he appears frequently in the media, including radio interviews, a television program on Piero della Francesca, a video for the National Gallery in Washington DC, and a Leonardo CD-ROM for Bill Gates.
Loading...
or
Not Currently Available for Direct Purchase