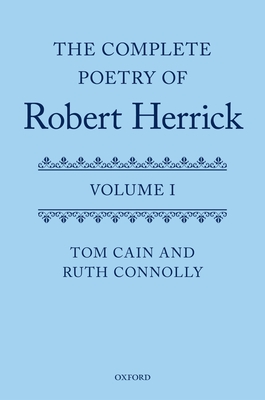 The Complete Poetry of Robert Herrick

This is the first edition for fifty years of one of the greatest of English lyric poets. Volume I concentrates on Herrick's large printed collection, Hesperides, published in 1648, and the product of nearly four decades of writing. The text is based on a collation of all fifty-seven known
surviving copies of Hesperides. In addition it includes a much needed new biography, covering the suicide of his father, his apprenticeship as a goldsmith-banker, and his subsequent career in Cambridge, London, and Devon. It provides a survey of Herrick's fluctuating critical reputation-from 'the
first in rank and station of English song-writers' to 'trivially charming'-and a detailed reconstruction of the original printing and publishing, just after the first Civil War, of a book which was the first 'Complete Works' to be published by an English poet. There is also a newly ordered sequence
of Herrick's letters from Cambridge, his only surviving prose. An extensive commentary on Hesperides is placed in Volume II so that readers can use it side by side with the poems if they wish. The commentary gives new translations of Herrick's hundreds of classical allusions, and quotes his equally
numerous Biblical ones, both of them far more extensive, and frequently far more playful, than has hitherto been realised. It also notes many parallels between Herrick's work and that of contemporaries, especially Jonson, Shakespeare, Burton, and John Fletcher, and his habit of echoing or quoting
himself, a tendency which reinforces the strong sense of Herrick's persona dominating the collection. Full explanations are given of contemporary personal, political, and cultural references.

Tom Cain is Professor Emeritus of Early Modern Literature at Newcastle University. He has worked on Herrick for many years, but has also written a study of Tolstoy (1977), and edited Nicholas Hilliard's Art of Limning (1981). His Revels Plays edition of Jonson's Poetaster (1995) was followed by anedition of the manuscript poems left by Herrick's patron, Mildmay Fane, Earl of Westmorland (2001). He has written several essays on Donne and Jonson, and has just edited Jonson's Sejanus for the Cambridge Works of Ben Jonson (2012). Ruth Connolly is Lecturer in Seventeenth-Century Literature at Newcastle University. Her current work focusses on the circulation of Stuart lyric poetry in manuscript, and on early modern women's writing, especially by members of on the Boyle family, Katherine Boyle Jones, Viscountess Ranelagh(1614-91) and Mary Boyle Rich, Countess of Warwick (1624-1678).
Loading...
or
Not Currently Available for Direct Purchase