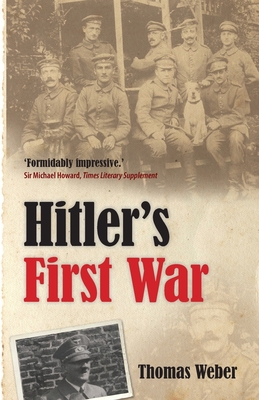 Adolf Hitler, the Men of the List Regiment, and the First World War

In Hitler's First War, award-winning author Thomas Weber delivers a master work of history--a major revision of our understanding of Hitler's life. Weber paints a group portrait of the List Regiment, Hitler's unit during World War I, to rewrite the story of his military service. Drawing on deep and imaginative research, Weber refutes the story crafted by Hitler himself, and so challenges the historical argument that the war led naturally to Nazism. Contrary to myth, the regiment consisted largely of conscripts, not enthusiastic volunteers. Hitler served with scores of Jews, including noted artist Albert Weisberger, who proved more heroic, and popular, than the future F�hrer. Indeed, Weber finds that the men shunned Private Hitler as a "rear area pig," and that Hitler himself was still unsure of his political views when the war ended in 1918. Through the stories of such comrades as a soldier-turned-concentration camp commandant, veterans who fell victim to the Holocaust, an officer who became Hitler's personal adjutant in the 1930s but then cooperated with British intelligence, and the veterans who simply went back to their Bavarian farms and never joined the Nazi ranks, Weber demonstrates how and why Hitler aggressively policed the myth of his wartime experience. Underlying all Hitler studies is a seemingly unanswerable question: Was he simply a product of his times, or an anomaly beyond all calculation? Weber's groundbreaking work sheds light on this puzzle and offers a profound challenge to the idea that World War I served as the perfect crucible for Hitler's consequent rise.

Thomas Weber is Reader in European and International History at the University of Aberdeen, Scotland. His first book, The Lodz Ghetto Album, won the Infinity Award of the International Center of Photography and the Golden Light Award. His second book, Our Friend "The Enemy", won the Duc d'Arenberg History Prize.
Loading...
or
Not Currently Available for Direct Purchase