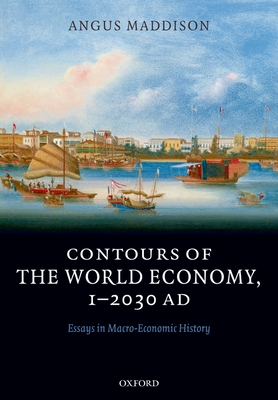 This book seeks to identify the forces which explain how and why some parts of the world have grown rich and others have lagged behind. Encompassing 2000 years of history, Part 1begins with the Roman Empire and explores the key factors that have influenced economic development in Africa, Asia,
the Americas and Europe. Part 2 covers the development of macroeconomic tools of analysis from the 17th century to the present. Part 3 looks to the future and considers what the shape of the world economy might be in 2030. Combining both the close quantitative analysis with a more qualitative approach that takes into account the complexity of the forces at work, Contours of the World Economy provides students with a totally fascinating overview of world economic history.

Angus Maddison is Emeritus Professor of Economic Sociology at the University of Groningen. Known for his pioneering work in the field of the quantification of economic growth in the global and historic perspective, Professor Maddison has enjoyed a varied career. He has held a number of positions atSt. Andrews University, Johns Hopkins University, MacGill University, the OECD, and Harvard University. He has also acted as a policy advisor for a number of institutions and advised the governments of Ghana and Pakistan. Prof. Maddison was recently awarded the title of Commander in the Order ofOrange-Nassau in the Netherlands.
Loading...
or
Not Currently Available for Direct Purchase