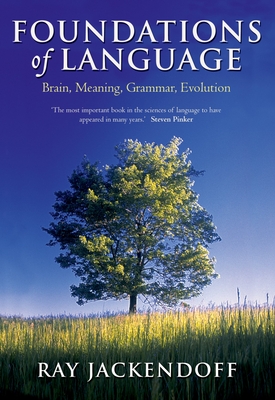 Already hailed as a masterpiece, Foundations of Language offers a brilliant overhaul of the last thirty-five years of research in generative linguistics and related fields. Few books really deserve the clich 'this should be read by every researcher in the field, ' writes Steven Pinker, author of The Language Instinct, But Ray Jackendoff's Foundations of Language does.
Foundations of Language offers a radically new understanding of how language, the brain, and perception intermesh. The book renews the promise of early generative linguistics: that language can be a valuable entree into understanding the human mind and brain. The approach is remarkably interdisciplinary. Behind its innovations is Jackendoff's fundamental proposal that the creativity of language derives from multiple parallel generative systems linked by interface components. This shift in basic architecture makes possible a radical reconception of mental grammar and how it is learned. As a consequence, Jackendoff is able to reintegrate linguistics with philosophy of mind, cognitive and developmental psychology, evolutionary biology, neuroscience, and computational linguistics. Among the major topics treated are language processing, the relation of language to perception, the innateness of language, and the evolution of the language capacity, as well as more standard issues in
linguistic theory such as the roles of syntax and the lexicon. In addition, Jackendoff offers a sophisticated theory of semantics that incorporates insights from philosophy of language, logic and formal semantics, lexical semantics of various stripes, cognitive grammar, psycholinguistic and neurolinguistic approaches, and the author's own conceptual semantics.
Here then is the most fundamental contribution to linguistic theory in over three decades.

Ray Jackendoff is Professor of Linguistics at Brandeis University. A Fellow of the American Academy of Arts and Sciences, president elect of the Linguistic Society of America, and past president of the Society for Philosophy and Psychology, he is the author of Semantics and Cognition, Consciousness and the Computational Mind, and The Architecture of the Language Faculty.
Loading...
or support indie stores by buying on