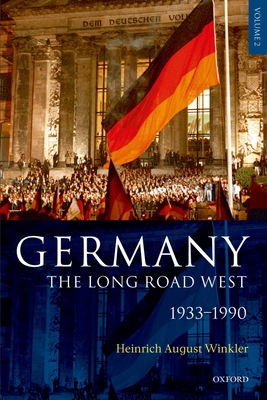 Vivid, succinct, and highly accessible, Heinrich Winkler's magisterial history of modern Germany offers the history of a nation and its people through two turbulent centuries. It is the story of a country that, while always culturally identified with the West, long resisted the political trajectories of its neighbors. This first volume (of two) begins with the origins and consequences of the medieval myth of the "Reich," which was to experience a fateful renaissance in the twentieth century, and ends with the collapse of the first German democracy. Winkler offers a brilliant synthesis of complex events and illuminates them with fresh insights. He analyses the decisions that shaped the country's triumphs and catastrophes, interweaving high politics with telling vignettes about the German people and their own self-perception. With a second volume that takes the story up to reunification in 1990, Germany: The Long Road West will be welcomed by scholars, students, and anyone wishing to understand this most complex and contradictory of countries.

Heinrich August Winkler was born in 1938 in K�nigsberg. He studied history, philosophy, and public law in T�bingen, Heidelberg and M�nster. He was associate professor at the Freie Universit�t in Berlin in 1970-72 and then professor of modern history in Freiburg until 1991. He has been at the Humboldt-Universit�t in Berlin since 1992, and has been a visiting scholar in Princeton, at the Wilson Center in Washington, at the Institute for Advanced Studies in Berlin, and at the Historisches Kolleg in Munich.
Loading...
or support indie stores by buying on