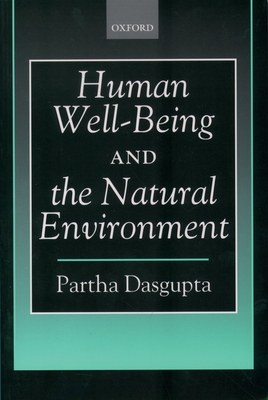 Human Well-Being and the Natural Environment

In Human Well-Being and the Natural Environment, Partha Dasgupta explores ways to measure the quality of life. In developing quality of life indices, he pays particular attention to the natuaral environment, illustrating how it can be incorporated, more generally, into economic reasoning in a seamless manner. Such familiar terms as "sustainable development," "social discount rates," and Earth's "carrying capacity" are given a firm theoretical underpinning. The author shows that, whether we are interested in valuing the state of affairs in a country or in evaluating economic policy there. The index that should be used is the economy's wealth, which is the social worth of its capital assets.
Dasgupta puts the theory he develops to use in extended commentaries on the economics of population, poverty traps, global warming, structural adjustment programs, and free trade, particularly in relation to poor countries. The result is a treatise that goes beyond quality-of-life measures and offers a comprehensive account of the newly emergent subject of ecological economics.
With the publication of this new paperback edition, Dasgupta has taken the opportunity to update and revise his text in a number of ways, including developments to facilitate its current use on a number of graduate courses in environmental and resource economics. The treatment of the welfare economics of imperfect economies has been developed using new findings, and the appendix has been expanded to include applications of the theory to a number of institutions and to develop approximate formulae for estimating the value of environmental natural resources.

Partha Dasgupta is the Frank Ramsey Professor of Economics at the University of Cambridge, and Fellow of St. John's College, Cambridge. A Past President of the Royal Economic Society and of the European Economic Association, Professor Dasgupta is a Fellow of the British Academy, Member of the Pontifical Academy of Social Sciences, Foreign Member of the Royal Swedish Academy of Sciences, and Foreign Associate of the US National Academy of Sciences. His publications include An Inquiry into Well-Being and Destitution (Clarendon Press, Oxford, 1993).
Loading...
or support indie stores by buying on