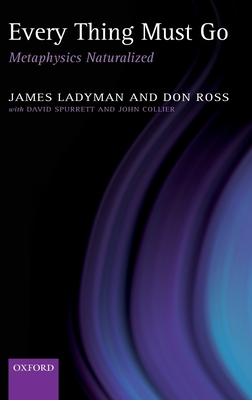 Every Thing Must Go

Every Thing Must Go aruges that the only kind of metaphysics that can contribute to objective knowledge is one based specifically on contemporary science as it really is, and not on philosophers' a priori intuitions, common sense, or simplifications of science. In addition to showing how recent metaphysics has drifted away from connection with all other serious scholarly inquiry as a result of not heeding this restriction, they demonstrate how to build a metaphysics compatible with current fundamental phsyics ("ontic structural realism"), which, when combined with their metaphysics of the special sciences ("rainforet realism"), can be used to unify physics with the other sciences without reducing these sciences to physics intself. Taking science metaphysically seriously, Ladyman and Ross argue, means that metaphysicians must abandon the picture of the world as composed of self-subsistent individual objects, and the paradigm of causation as the collision of such objects. Every Thing Must Go also assesses the role of information theory and complex systems theory in attempts to explain the relationship between the special sciences and physics, treading a middle road between the grand synthesis of thermodynamics and information, and eliminativism about information. The consequences of the author's metaphysical theory for central issues in the philosophy of science are explored, including the implications for the realism vs. empiricism debate, the role of causation in scientific explanations, the nature of causation and laws, the status of abstract and virtual objects, and the objective reality of natural kinds