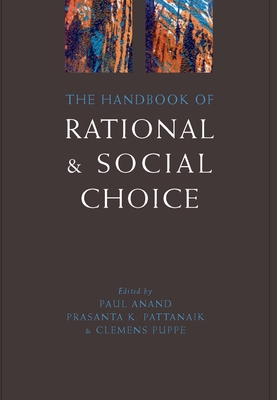 The Handbook of Rational and Social Choice

An Overview of New Foundations and Applications (Oxford Handbooks)

The Handbook of Rational and Social Choice provides an overview of issues arising in work on the foundations of decision theory and social choice over the past three decades. Drawing on work by economic theorists mainly, but also with contributions from political science, philosophy and psychology, the collection shows how the related areas of decision theory and social choice have developed in their applications and moved well beyond the basic models of expected utility and utilitarian approaches to welfare economics. Containing twenty-three contributions, in many cases by leading figures in their fields, the handbook shows how the normative foundations of economics have changed dramatically as more general and explicit models of utility and group choice have been developed. This is perhaps the first time these developments have been brought together in a manner that seeks to identify and make accessible the recent themes and developments that have been of particular interest to researchers in recent years. The collection will be of particular value to researchers in economics with interests in utility or welfare but it will also be of interest to any social scientist or philosopher interested in theories of rationality or group decision-making.