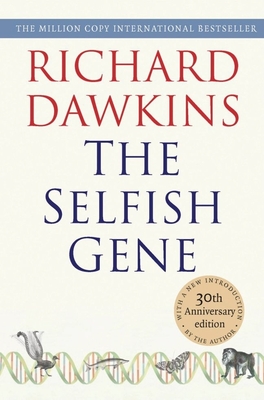 Richard Dawkins' brilliant reformulation of the theory of natural selection has the rare distinction of having provoked as much excitement and interest outside the scientific community as within it. His theories have helped change the whole nature of the study of social biology, and have forced thousands of readers to rethink their beliefs about life.
In his internationally bestselling, now classic volume, The Selfish Gene, Dawkins explains how the selfish gene can also be a subtle gene. The world of the selfish gene revolves around savage competition, ruthless exploitation, and deceit, and yet, Dawkins argues, acts of apparent altruism do exist in nature. Bees, for example, will commit suicide when they sting to protect the hive, and birds will risk their lives to warn the flock of an approaching hawk.
This 30th anniversary edition of Dawkins' fascinating book retains all original material, including the two enlightening chapters added in the second edition. In a new Introduction the author presents his thoughts thirty years after the publication of his first and most famous book, while the inclusion of the two-page original Foreword by brilliant American scientist Robert Trivers shows the enthusiastic reaction of the scientific community at that time. This edition is a celebration of a remarkable exposition of evolutionary thought, a work that has been widely hailed for its stylistic brilliance and deep scientific insights, and that continues to stimulate whole new areas of research today.

Richard Dawkins is the Charles Simonyi Professor of the Public Understanding of Science at Oxford University, a Fellow of the Royal Society and of the Royal Society of Literature, and an international lecturer. His acclaimed books include The Extended Phenotype, a more technical sequel to The Selfish Gene, and The Blind Watchmaker, which won the Royal Society of Literature Award and the Los Angeles Times Prize, both in 1987. His other bestsellers include River out of Eden, Climbing Mount Impossible, Unweaving the Rainbow, and the A Devil's Chaplain. His most recent book is The Ancestor's Tale. Professor Dawkins is the recipient of many prizes and honors, including the Shakespeare Prize, the Silver Medal of the Zoological Society of London, the Royal Society's Michael Faraday Award, the Nakayama Prize for Achievement in Human Science, The International Cosmos Prize, and the Kistler Prize.
Loading...
or
Not Currently Available for Direct Purchase