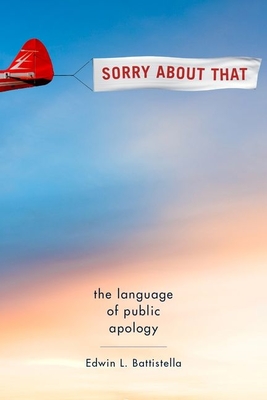 The Language of Public Apology

People do bad things. They misspeak, mislead, and misbehave. They lie, cheat, steal, and kill. Often, afterward, they apologize. But what makes a successful apology? Why does Joe Biden's 2007 apology for referring to Barack Obama as articulate and bright succeed, whereas Mel Gibson's 2006
apology for his anti-Semitic tirade fails? Naturally, the effectiveness of an apology depends on the language used, as well as the conditions under which we offer our regrets. In Sorry About That, linguist Edwin Battistella analyzes the public apologies of presidents, politicians, entertainers, and businessmen, situating the apology within American popular culture. Battistella offers the fascinating stories behind these apologies alongside his own analysis of the language
used in each. He uses these examples to demonstrate the ways in which language creates sincere or insincere apologies, why we choose to apologize or don't, and how our efforts to say we are sorry succeed or fail. Each chapter expands on a central concept or distinction that explains part of the apology process. Battistella covers over fifty memorable apologies from McDonald's, Martha Stewart, Oprah Winfrey, Jane Fonda, Bill Clinton, and many more. Moving back and forth between examples and concepts,
Battistella connects actual apologies with the broader social, ethical, and linguistic principles behind them. Readers will come away from the book better consumers of apologies - and better apologizers as well.

Edwin L. Battistella teaches linguistics and writing at Southern Oregon University in Ashland, where he has served as a dean and as interim provost. He is the author of Do You Make These Mistakes in English? (OUP, 2009), Bad Language (OUP, 2005), and The Logic of Markedness (OUP, 1996).
Loading...
or support indie stores by buying on