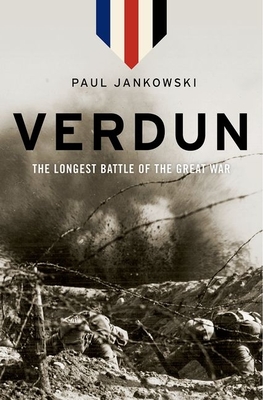 The Longest Battle of the Great War

At seven o'clock in the morning on February 21, 1916, the ground in northern France began to shake. For the next ten hours, twelve hundred German guns showered shells on a salient in French lines. The massive weight of explosives collapsed dugouts, obliterated trenches, severed communication wires, and drove men mad. As the barrage lifted, German troops moved forward, darting from shell crater to shell crater. The battle of Verdun had begun. In Verdun, historian Paul Jankowski provides the definitive account of the iconic battle of World War I. A leading expert on the French past, Jankowski combines the best of traditional military history- its emphasis on leaders, plans, technology, and the contingency of combat-with the newer social and cultural approach, stressing the soldier's experience, the institutional structures of the military, and the impact of war on national memory. Unusually, this book draws on deep research in French and German archives; this mastery of sources in both languages gives Verdun unprecedented authority and scope. In many ways, Jankowski writes, the battle represents a conundrum. It has an almost unique status among the battles of the Great War; and yet, he argues, it was not decisive, sparked no political changes, and was not even the bloodiest episode of the conflict. It is said that Verdun made France, he writes; but the question should be, What did France make of Verdun? Over time, it proved to be the last great victory of French arms, standing on their own. And, for France and Germany, the battle would symbolize the terror of industrialized warfare, "a technocratic Moloch devouring its children," where no advance or retreat was possible, yet national resources poured in ceaselessly, perpetuating slaughter indefinitely.

Paul Jankowski is Raymond Ginger Professor of History at Brandeis University. His many books include Stavinksy: A Confidence Man in the Republic of Virtue and Shades of Indignation: Political Scandals in France, Past and Present.
or
Not Currently Available for Direct Purchase
Copyright © 2020 American Booksellers Association