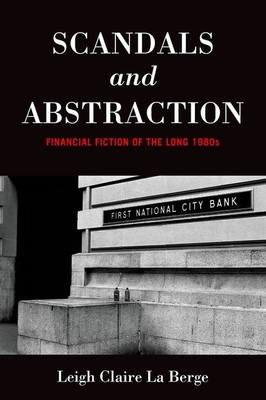 Financial Fiction of the Long 1980s

The Long 1980s could be summed up handily in the annals of U.S. cultural history with the enduring markers of Ronald Reagan's presidency, Oliver Stone's film Wall Street, and Dire Straits's hit single "Money for Nothing." Despite their vast differences, each serves to underscore the confidence, jingoism, and optimism that powered the U.S. economy throughout the decade. Mining a wide range of literature, film, and financial print journalism, Scandals and Abstraction chronicles how American society's increasing concern with finance found expression in a large array of cultural materials that ultimately became synonymous with postmodernism. The ever-present credit cards, monetary transactions, and ATMs in Don De Lillo's White Noise open this study as they serve as touchstones for its protagonist's sense of white masculinity and ground the novel's narrative form. Tom Wolfe's The Bonfire of the Vanities and Oliver Stone's Wall Street animate a subsequent chapter, as each is considered in light of the 1987 stock market crash and held up as a harbinger of a radical new realism that claimed a narrative monopoly on representing an emergent financial era. These works give way to the pornographic excess and violence of Bret Easton Ellis's epochal American Psycho, which is read alongside the popular 1980s genre of the financial autobiography. With a series of trenchant readings, La Berge argues that Ellis's novel can be best understood when examined alongside Ivan Boesky's Merger Mania, Donald Trump's The Art of the Deal, and T. Boone Pickens's Boone. A look at Jane Smiley's Good Faith and its plot surrounding the savings and loan crisis of the 1980s and 1990s, concludes the study, and considers how financial reportage became a template for much of our current writing about of finance. Drawing on a diverse archive of novels, films, autobiographies, and journalism, Scandals and Abstraction provides a timely study of the economy's influence on fiction, and outlines a feedback loop whereby postmodernism became more canonical, realism became more postmodern, and finance became a distinct cultural object.