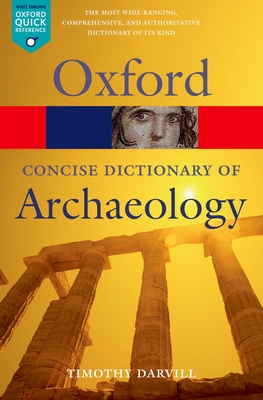 This is the most wide-ranging, comprehensive, and up-to-date dictionary of archaeology available. Over 4,000 A-Z entries explain the terms encountered in academic and popular archaeological literature, in lectures, and on television. Topics covered include artifacts, techniques, terminology, people, sites, and periods, and specialist areas such as industrial and maritime archaeology. This second edition is fully revised and updated, with 150 new entries on archaeological sites, terms, movements, and people, plus extended coverage of archaeological resource management and archaeological theory. While the dictionary's primary focus is on Europe, the Old World, and the Americas, as these are the regions where archaeology has become best established, it also includes key archaeological sites around the world. A quick-reference section covers chronological periods, Egyptian rulers and dynasties, Roman rulers and dynasties, rulers of England to AD 1066, and principal international conventions and recommendations. New to this edition are recommended, up-to-date web links for over 100 entries on the Dictionary of Archaeology companion website, regularly updated to keep links completely current.

Timothy Darvill is Professor of Archaeology at Bournemouth University, and is a fellow of the Society of Antiquaries. He graduated from Southampton University and has worked for the Western Archaeological Trust and the Council for British Archaeology. He has directed a number of excavations, wassecretary of the Committee for Archaeology in Gloucestershire, and secretary of CBA Group 13. He has also served on the Council of the National Trust and was chairman of the Institute of Field Archaeologists. He is currently chairman of the board of directors of the Cotswold Archaeological TrustLtd. His previous publications include numerous reports and papers in academic and popular journals, and he has written several books including: The Archaeology of the Uplands (1986), Prehistoric Britain (1987), and Prehistoric Britain from the Air (1997), England: An Archaeological Guide (2002), and Stonehenge: the biography of a landscape (2006) .
Loading...
or
Not Currently Available for Direct Purchase