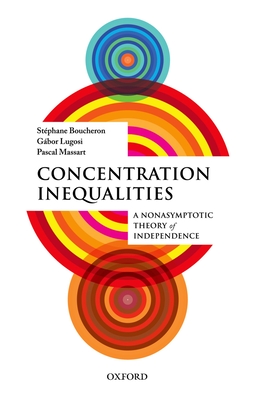 A Nonasymptotic Theory of Independence

Concentration inequalities for functions of independent random variables is an area of probability theory that has witnessed a great revolution in the last few decades, and has applications in a wide variety of areas such as machine learning, statistics, discrete mathematics, and high-dimensional geometry. Roughly speaking, if a function of many independent random variables does not depend too much on any of the variables then it is concentrated in the sense that with high probability, it is close to its expected value. This book offers a host of inequalities to illustrate this rich theory in an accessible way by covering the key developments and applications in the field.
The authors describe the interplay between the probabilistic structure (independence) and a variety of tools ranging from functional inequalities to transportation arguments to information theory. Applications to the study of empirical processes, random projections, random matrix theory, and threshold phenomena are also presented. A self-contained introduction to concentration inequalities, it includes a survey of concentration of sums of independent random variables, variance bounds, the entropy method, and the transportation method. Deep connections with isoperimetric problems are revealed whilst special attention is paid to applications to the supremum of empirical processes. Written by leading experts in the field and containing extensive exercise sections this book will be an invaluable resource for researchers and graduate students in mathematics, theoretical computer science, and engineering.