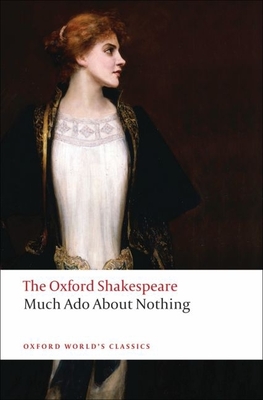 Much ADO about Nothing

The Oxford Shakespeare Much ADO about Nothing (Oxford World's Classics)

Sparkling with the witty dialogue between Beatrice and Benedicts, Much Ado About Nothing is one of Shakespeare's most enjoyable and theatrically successful comedies. This edition offers a newly edited text and an exceptionally helpful and critically aware introduction. Paying particular attention to analysis of the play's minor characters, Sheldon P Zitner discusses Shakespeare's transformation of his source material. He rethinks the attitudes to gender relations that underlie the comedy and determine its view of marriage. About the Series: For over 100 years Oxford World's Classics has made available the broadest spectrum of literature from around the globe. Each affordable volume reflects Oxford's commitment to scholarship, providing the most accurate text plus a wealth of other valuable features, including expert introductions by leading authorities, voluminous notes to clarify the text, up-to-date bibliographies for further study, and much more. Allowing for the play's openness to reinterpretation by successive generations of readers and performers, Zitner provides a socially analytic stage history, advancing new views for the actor as much as for the critic.

Sheldon P. Zitner is Professor Emeritus, Trinity College, University of Toronto. He has written extensively on Renaissance Literature, including a recent book-length study of All's Well That Ends Well (Harvester Wheatsheaf, 1989)
Loading...
or support indie stores by buying on