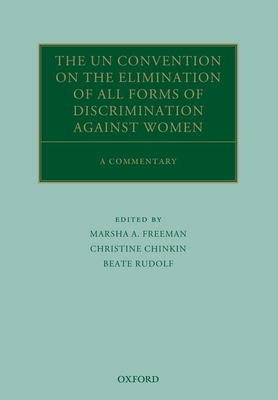 This volume is the first comprehensive commentary on the Convention on the Elimination of All Forms of Discrimination against Women and its Optional Protocol. The Convention is a key international human rights instrument and the only one exclusively addressed to women. It has been described as the United Nations' 'landmark treaty in the struggle for women's rights'. The Commentary describes the application of the Convention through the work of its monitoring body, the Committee on the Elimination of Discrimination against Women. It comprises detailed analyses of the Preamble and each article of the Convention and of the Optional Protocol. It also includes a separate chapter on the cross-cutting substantive issue of violence against women. The sources relied on are the treaty language and the general recommendations, concluding observations and case law under the Optional Protocol, through which the Committee has interpreted and applied the Convention. Each chapter is self-contained but the Commentary is conceived of as an integral whole. The book also includes an introduction which provides an overview of the Convention and its embedding in the international law of human rights.

Marsha A. Freeman, Senior Fellow, University of Minnesota Human Rights Center; Director, International Women's Rights Action Watch, Christine Chinkin, Professor of International Law, London School of Economics and Political Science; Professor of International Law, London School of Economics and Political Science;, Beate Rudolf, Director of the German Institute for Human Rights Marsha A. Freeman is Director of the International Women's Rights Action Watch and a Senior Fellow at the University of Minnesota Human Rights Center. IWRAW is an international women's human rights resource centre and pioneered the shadow reporting to the Committee on the Elimination of Discrimination against Women. Dr. Freeman is the editor of Assessing the Status of Women, a guide to using the CEDAW Convention, and author of Women's Economic, Cultural and Social Rights, a manual for working with the International Covenant on Economic, Social and Cultural Rights. She teaches at the University of Minnesota Law School. Christine Chinkin has law degrees from the universities of London and Sydney and Yale Law School. She has taught international law in Singapore, Australia and the United States as well as in the United Kingdom. She is a member of Matrix Chambers and the author of many articles on international human rights law, especially relating to women's human rights. She has been a consultant to the United Nations Division for the Advancement of Women and the Office of the High Commissioner for Human Rights. Since 1 January 2010, Professor Beate Rudolf has been the Director of the German Institute for Human Rights. Prior to that, she was a junior professor for public law and equality law at the faculty of law of Freie Universitat Berlin and director of the research project Public International Law Standards for Governance in Weak and Failing States within the Research Center Governance in Areas of Limited Statehood. Her research focuses on human rights and legal principles on state structures under public international law, European law and German constitutional law as well as from a comparative law perspective.
Loading...
or
Not Currently Available for Direct Purchase