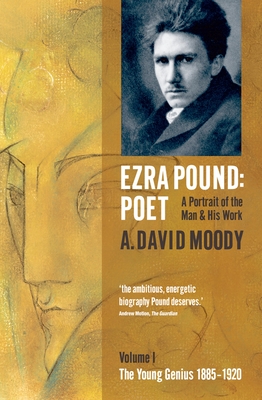 This first volume of what will be a full-scale biography presents Ezra Pound as a very determined and energetic young genius--at 15 he told his father I want to write before I die the greatest poems that have ever been written--setting out to make his way both as a poet and as a force for civilization in England and America in the years before, during and just after World War I.
In this lively narrative A. David Moody weaves a story of Pound's early life and loves, his education in America, and his years in London, where he trained himself to become a great poet-learning from W. B.Yeats, Ford Madox Hueffer, and others-and exhorting his contemporaries to abandon Victorian sentimentality and make it new. Pound was at the center of everything, forming his own Imagiste group, joining with Wyndham Lewis in his Vorticism, championing the work of James Joyce, Robert Frost, William Carlos Williams, and T. S. Eliot, and constantly on the lookout for new talent as International Editor for Harriet Monroe's Poetry magazine. Moody traces Pound's evolution as a poet from the derivative idealism and aestheticism of his precocious youth to his Cathay, based on the transliterations of the Sineologist Ernest Fenollosa, to the stunningly original Homage to Sextus Propertius and Hugh Selwyn Mauberley. By 1920 Pound was established as a force for revolution in poetry and in his critical writing as a brilliant iconoclast who argued against stifling conventions and the economic injustice of the capitalist system.
Ezra Pound: Poet gives us illuminating readings of the major early works and a unforgettable portrait of Pound himself-by turns brilliant, combative, selfless, ambitious-and always fascinating.

A. David Moody is Professor Emeritus of the University of York and the author of the acclaimed Thomas Stearns Eliot: Poet.
Loading...
or support indie stores by buying on