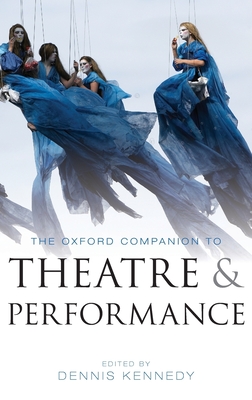 Ranging from ancient Greek tragedies to the latest developments around the globe, The Oxford Companion
to Theatre and Performance provides an all-embracing approach that encompasses drama and musical, opera, dance, radio, and non-dramatic performances including circuses and parades. Based on the celebrated two-volume Oxford Encyclopedia of Theatre and Performance, this compact, affordable Companion features more than 2,000 up-to-date entries, covering styles and movements, buildings, organizations, and traditions--with a particularly strong focus on biographies of actors, playwrights, directors, and designers. Editor Dennis Kennedy has significantly updated the timeline of historical and cultural events in the world of theatre and performance, and he has added an appendix of useful weblinks, which are supported and accessible through a companion website. Finally, the book includes many new entries that cover the people and companies who have come into prominence since the publication of the Encyclopedia.

Dennis Kennedy is Emeritus Professor and Fellow of Drama and Theatre Studies at Trinity College, Dublin, where he was previously Samuel Beckett Professor and Head of the School of Drama. He has also been Professor of Theatre Arts at the University of Pittsburgh and Associate Professor of English at Grand Valley State University in Michigan. He has held distinguished visiting professorships at the Salzburg Seminar, McMaster University, the University of Victoria, and the University of Wisconsin, and was Senior Fulbright Lecturer at the University of Karachi in Pakistan. His publications include Granville Barker and the Dream of Theatre (CUP, 1985), Plays by Harley Granville Barker (CUP, 1987), Looking at Shakespeae: a visual history of twentieth-century performance (CUP, 1993, 2nd edn 2001), Foreign Shakespeare (CUP, 1993). His own plays have been performed in New York, London and at regional theatres in the US.
or support indie stores by buying on
Copyright © 2020 American Booksellers Association