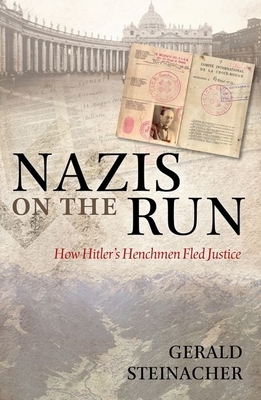 Nazis on the Run

After World War II, rumors circulated that a secret organization named "Odessa" had smuggled Nazi war criminals out of Europe, a rumor further fueled by the wildly popular novel The Odessa File. But "Odessa" was nothing more than a myth. Now, in Nazis on the Run, historian Gerald Steinacher provides the true story of how the Nazis escaped their fate.
Steinacher not only reveals how Nazi war criminals escaped from justice at the end of the Second World War, fleeing through the Tyrolean Alps to Italian seaports, but he also highlights the key roles played by the Red Cross, the Vatican, and the Secret Services of the major powers. The book takes a hard look at the International Committee of the Red Cross, proving that identification papers issued by the Red Cross made it possible for thousands of Nazis, war criminals, and collaborators--including Adolf Eichmann and Josef Mengale--to slip through the hands of justice and to find refuge in North and South America, Spain, and the Near East. Steinacher underscores the importance of the South Tyrol as a "ratline" from Germany to Italy and also reveals that many figures in the Catholic Church--sometimes knowingly, other times unwittingly--were involved in large-scale Nazi smuggling, often driven by the fear of an imminent communist takeover of Italy. Finally, the book documents how the Counter Intelligence Corps and later the CIA recruited former SS men to advise U.S. intelligence agencies and smuggled them out of Soviet-occupied areas of Austria and Eastern Europe into Italy and on to South America.
Based on extensive research in newly opened archives, Nazis on the Run is the first book to provide a complete picture of this little-known story of justice denied.

Gerald Steinacher is currently a Joseph A. Schumpeter Research Fellow at the Center for European Studies at Harvard University and Lecturer on Contemporary History at the University of Innsbruck, Austria.
Loading...
or
Not Currently Available for Direct Purchase