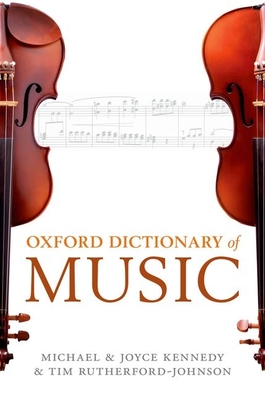 The Oxford Dictionary of Music

For the sixth edition of this classic dictionary, the text has been thoroughly revised and updated. With over 10,000 entries, the Oxford Dictionary of Music (previously the Concise Oxford Dictionary of Music) offers broad coverage of a wide range of musical categories spanning many eras, including composers, librettists, singers, orchestras, important ballets and operas, and musical instruments and their history. Over 250 new entries have been added to this edition to expand coverage of popular music, ethnomusicology, modern and contemporary composers, music analysis, and recording technology. Existing entries have been expanded where necessary to include more coverage of the reception of major works, and to include key new works and categories, such as multimedia. Entry-level web links are listed and regularly updated on a dedicated companion website, expanding the scope of the dictionary. The dictionary now also includes two useful appendices, one listing French, German, and Italian musical terms with their English translations, and an abbreviations list for letters commonly used in musical scores and musical writing. The Oxford Dictionary of Music is the most up-to-date and accessible dictionary of musical terms available and an essential point of reference for music students, teachers, lecturers, professional musicians, as well as music enthusiasts.

Tim Rutherford-Johnson has worked for the New Grove Dictionary of Music and Musicians since 1999 and until 2010 was the editor responsible for the dictionary's coverage of 20th- and 21st century music. He has published and lectured on several contemporary composers, and regularly reviews new music for both print and online publications. Michael Kennedy was chief music critic of The Sunday Telegraph from 1989 to 2005. Before that he was a staff music critic on The Sunday Telegraph from 1950 and its Northern Editor from 1960 to 1986. He is an authority on English music of the 20th century and has written books on Elgar, Vaughan Williams, Britten, and Walton as well as on Mahler, Strauss, Barbirolli, Boult, and the Halle Orchestra. He was awarded the OBE in 1981 and the CBE in 1997, and is a member of the Board of Governors of the Royal Northern College of Music, Manchester. The honorary degree of Doctor of Music was conferred on him in 2003 by the University of Manchester. Joyce Bourne practised for almost 30 years as an anaesthetist and general practitioner until her retirement in 1990. She has a lifelong interest in and love of music and has assisted Michael Kennedy with his works since 1978, both as researcher and typist. Her book Who's Who in Opera was published in 1998.
Loading...
or
Not Currently Available for Direct Purchase