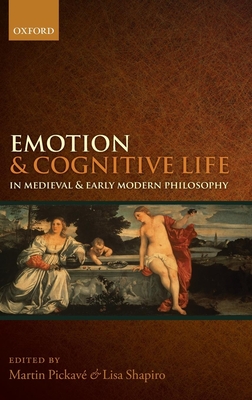 Emotion and Cognitive Life in Medieval and Early Modern Philosophy

This volume offers a much needed shift of focus in the study of emotion in the history of philosophy. Discussion has tended to focus on the moral relevance of emotions, and (except in ancient philosophy) the role of emotions in cognitive life has received little attention. Thirteen new essays investigate the continuities between medieval and early modern thinking about the emotions, and open up a contemporary debate on the relationship between emotions, cognition, and reason, and the way emotions figure in our own cognitive lives. A team of leading philosophers of the medieval, renaissance, and early modern periods explore these ideas from the point of view of four key themes: the situation of emotions within the human mind; the intentionality of emotions and their role in cognition; emotions and action; the role of emotion in self-understanding and the social situation of individuals.

Martin Pickav� is Associate Professor of Philosophy and Medieval Studies at University of Toronto. He specializes in later medieval philosophy of mind and metaphysics, and is working on a monograph on medieval theories of the emotions. Lisa Shapiro is Associate Professor of Philosophy at Simon Fraser University. She is the author of numerous articles on Descartes, with a specific focus on how his writings on the passions sheds light on his account of human nature, and on writings of early modern women thinkers. She is also the editor and translator of The Correspondence between Princess Elisabeth of Bohemia and Rene Descartes. Her current research is focussed on Spinoza, Condillac, and Hume.
Loading...
or support indie stores by buying on