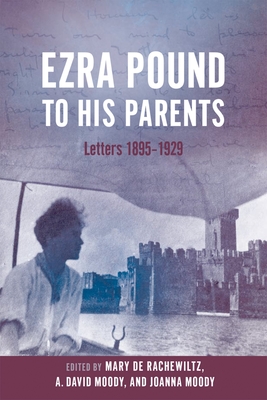 Ezra Pound to His Parents

The poet Ezra Pound (1885-1972) was the only child of Homer Loomis Pound (1885-1942) and Isabel Weston Pound (1860-1948). He grew up in Philadelphia, where his father was an assayer in the U.S. Mint; was educated at the University of Pennsylvania, and at Hamilton College in upstate New York; taught briefly at Wabash College, Crawfordsville, Indiana; then left America for London, where he lived from 1908 to the end of 1920, after which he lived in Paris until 1924, and then in Rapallo, Italy. His letters home reveal not only the warm affection, openness, and playfulness of the young man to his devoted parents, from schooldays through college and on into his life as teacher, poet, and critic, but also the ways in which he shared with them the ideas, influences, and experiences that went into the development of his exceptional poetic genius. He kept them in touch with his progress in realising his ambition to become a good and powerful poet, with what he was writing and doing, who he was meeting, his dealings with publishers, editors, and magazines, and his bold plans for reforms and revolutions. The letters are a rich mine of information about Pound himself and about the literary and social worlds in which he moved and had his being. They also display his epistolary idiosyncrasies and his inventive and witty way with words. Altogether they are of great human as well as literary and historical interest, and give an intimate insight into this revolutionary and influential poet's life and work. This is an essential volume for anyone interested in Pound, and an irresistible book for the general reader with an interest in literary life in the twentieth century. All the extant letters to his parents up to 1929, the year they moved to be near him in Rapallo, are included here in full. Ezra Pound's daughter Mary de Rachewiltz directed the edition, and contributes a memoir of Isabel and Homer Pound. There is a comprehensive Glossary of persons named in the letters, and the letters are accompanied by explanatory notes and commentary.

Mary de Rachewiltz, the daughter of Ezra Pound, was Curator of the Ezra Pound Archive in the Beinecke Rare Book and Manuscript Library, Yale University, and has edited and translated into Italian his Cantos and much else of his poetry and prose. She is a published poet in her own right, as well as the translator into Italian of several American poets including Marianne Moore, E. E. Cummings, and Denise Levertov. A. David Moody is Professor emeritus of the University of York. He is currently at work on a critical biography of Ezra Pound, of which the first volume was published by OUP in 2007.Joanna Moody taught in the Department of English and Related Literature at the University of York. She edited The Diary of Lady Margaret Hoby, 1599-1605 and The Private Correspondence of Jane Lady Cornwallis Bacon.
Loading...
or
Not Currently Available for Direct Purchase