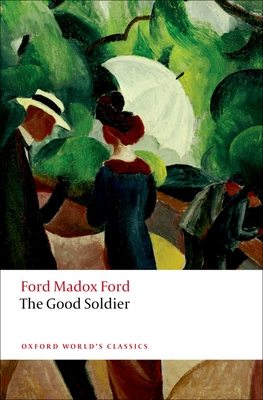 The Good Soldier is Ford Madox Ford's masterpiece, a riveting story and one of the most compelling examples of early Modernism: a virtuoso performance of how to use an unreliable narrator. Wealthy American John Dowell tells what he calls the saddest story, about a secret affair between his wife and another man that is finally revealed in a crescendo of death and madness. Ford's novel reflects contemporary interests in psychology, sexuality, and the New Woman, and it treats Henry James's transatlantic theme with an existential horror comparable to Joseph Conrad's. Its portrayal of the destruction of a civilized elite anticipates the cataclysm of the First World War, which erupted while Ford was finishing the book. This new edition features an Introduction by Max Saunders, one of the leading Ford scholars, who explores the novel as a key work of Modernism, shedding light on the nature of literary Impressionism and its relationship with the psychological realism of the characters. An appendix includes Ford's crucial essay On Impressionism, written contemporaneously with the novel, which offers insight into Ford's artistry. This edition also has extensive notes, a chronology of the novel's main events, and an up-to-date bibliography. About the Series: For over 100 years Oxford World's Classics has made available the broadest spectrum of literature from around the globe. Each affordable volume reflects Oxford's commitment to scholarship, providing the most accurate text plus a wealth of other valuable features, including expert introductions by leading authorities, voluminous notes to clarify the text, up-to-date bibliographies for further study, and much more.

Max Saunders is a Professor of English at King's College London. He is the author of the highly acclaimed two-volume biography Ford Madox Ford: A Dual Life, has edited a range of Ford's poetry and prose, and is the general editor of International Ford Madox Ford Studies.
Loading...
or support indie stores by buying on
(This book is on backorder)