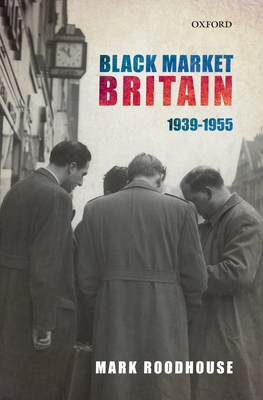 Thanks to rationing and price control, Britain's underground economy flourished during the 1940s and early 1950s as producers, traders, and professional criminals helped consumers to get a little extra on the side, from under the counter, or off the back of a lorry. Yet widespread
evasion of regulations designed to ensure fair shares for all did not undermine the austerity policies that characterised these years. In Black Market Britain, Mark Roodhouse argues that Britons showed self-restraint in their illegal dealings. The means, motives, and opportunities for evasion were not lacking. The shortages were real, regulations were not watertight, and enforcement was haphazard. Fairness, not patriotism and
respect for the law, is the key to understanding this self-restraint. By invoking popular notions of a fair price, a fair profit, and a fair share, government rhetoric limited black marketeering as would-be evaders had to justify their offences both to themselves and others. Black Market Britain underlines the importance of fairness to those seeking a richer understanding of economic life in modern Britain.

Mark Roodhouse is a Lecturer in History at the University of York. His research focuses on the economic and social history of modern Britain.
Loading...
or
Not Currently Available for Direct Purchase