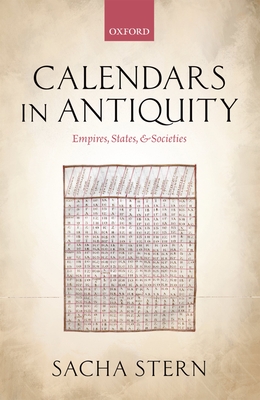 Calendars were at the heart of ancient culture and society, and were far more than just technical, time-keeping devices. Calendars in Antiquity offers a comprehensive study of the calendars of ancient Mesopotamia, Egypt, Persia, Greece, Rome, Gaul, and all other parts of the Mediterranean and the Near East, from the origins up to and including Jewish and Christian calendars in late Antiquity. In this volume, Stern sheds light on the political context in which ancient calendars were designed and managed. Set and controlled by political rulers, calendars served as expressions of political power, as mechanisms of social control, and sometimes as assertions of political independence, or even of sub-culture and dissidence. While ancient calendars varied widely, they all shared a common history, evolving on the whole from flexible, lunar calendars to fixed, solar schemes. The Egyptian calendar played an important role in this process, leading most notably to the institution of the Julian calendar in Rome, the forerunner of our modern Gregorian calendar. Stern argues that this common, evolutionary trajectory was not the result of scientific or technical progress. It was rather the result of major political and social changes that transformed the ancient world, with the formation of the great Near Eastern empires and then the Hellenistic and Roman Empires from the first millennium BC to late Antiquity. The institution of standard, fixed calendars served the administrative needs of these great empires but also contributed to their cultural cohesion.

Sacha Stern is Professor of Jewish Studies at University College London. His research and publications are centred on ancient and medieval time and calendars, as well as on other aspects of Jewish history in Antiquity.
or
Not Currently Available for Direct Purchase
Copyright © 2020 American Booksellers Association