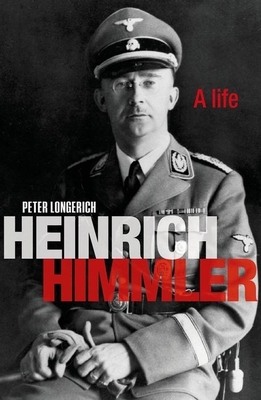 Heinrich Himmler was an unremarkable looking man. Yet he was Hitler's top enforcer, in charge of the Gestapo, the SS, and the so-called Final Solution. We can only wonder, as biographer Peter Longerich asks, how could such a banal personality attain such a historically unique position of power? How could the son of a prosperous Bavarian Catholic public servant become the organizer of a system of mass murder spanning the whole of Europe? In the first comprehensive biography of this murderous enigma, Longerich answers those questions with a superb account of Himmler's inner self and outward acts. Masterfully interweaving the story of Himmler's personal life and political career with the wider history of the Nazi dictatorship, Longerich shows how skillfully he exploited and manipulated his disparate roles in the pursuit of his far-reaching and grandiose objectives. Himmler's actual strength, he writes, consisted in redrawing every two or three years the master plans for his sphere of power. Himmler expanded that sphere with ruthless efficiency. In 1929, he took the SS-a small bodyguard unit-and swelled it into a paramilitary organization with elite pretensions. By the end of 1934 he had become Reich Chief of the Political Police, and began to consolidate all police power in his own hands. As Germany grabbed neighboring territory, he expanded the Waffen SS and organized the "Germanization" of conquered lands, which culminated in systematic mass murder. When the regime went on the defensive in 1942, Himmler changed his emphasis again, repressing any opposition or unrest. The author emphasizes the centrality of Himmler's personality to the Nazi murder machine-his surveillance of the private lives of his men, his deep resentments, his fierce prejudices-showing that man and position were inseparable. Carefully researchedand lucidly written, Heinrich Himmler is the essential account of the man who embodied Hitler's apparatus of evil.

Peter Longerich is Professor of Modern German History at Royal Holloway University of London and founder of the College's Holocaust Research Centre. He has published widely on the history of Nazi Germany and the Holocaust, including Holocaust: The Nazi Murder and Persecution of the Jews, also published by Oxford University Press, which is widely recognized as the standard account of the Nazi machinery of mass murder and the steps by which it unfolded.
Loading...
or
Not Currently Available for Direct Purchase