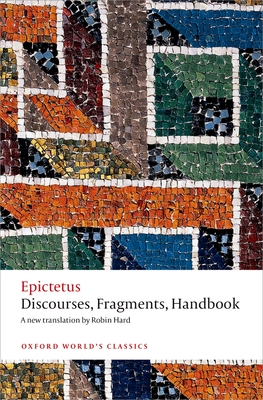 'About things that are within our power and those that are not.' Epictetus' Discourses have been the most widely read and influential of all writings of Stoic philosophy, from antiquity onwards. They set out the core ethical principles of Stoicism in a form designed to help people put them into practice and to use them as a basis for leading a good human life. Epictetus was a teacher, and a freed slave, whose discourses have a vivid informality, animated by anecdotes and dialogue. Forceful, direct, and challenging, their central message is that the basis of happiness is up to us, and that we all have the capacity, through sustained reflection and hard work, of achieving this goal. They still speak eloquently to modern readers seeking meaning in their own lives. This is the only complete modern translation of the Discourses, together with the Handbook or manual of key themes, and surviving fragments. Robin Hard's accurate and accessible translation is accompanied by Christopher Gill's full introduction and comprehensive notes. About the Series For over 100 years Oxford World's Classics has made available the broadest spectrum of literature from around the globe. Each affordable volume reflects Oxford's commitment to scholarship, providing the most accurate text plus a wealth of other valuable features, including expert introductions by leading authorities, voluminous notes to clarify the text, up-to-date bibliographies for further study, and much more.

Robin Hard is the author of The Routledge Handbook of Greek Mythology (2003) and the translator and editor of Apollodorus' Library of Greek Mythology (1997) and Diogenes' Sayings and Anecdotes (2012) for Oxford World's Classics, as well as the translator of Marcus Aurelius' Meditations (OWC, 2011), with introduction and notes by Christopher Gill. Christopher Gill has written extensively on ancient philosophy, especially on Hellenistic and Roman ethics and psychology. He is the editor of Marcus Aurelius' Meditations, tr. Robin Hard, for Oxford World's Classics.
Loading...
or support indie stores by buying on