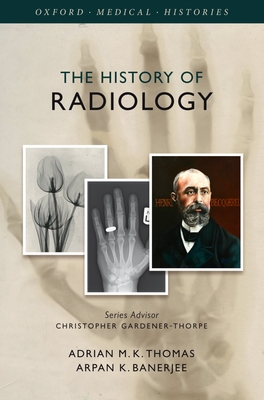 In 1890, Professor Arthur Willis Goodspeed, a professor of physics at Pennsylvania USA was working with an English born photographer, William N Jennings, when they accidentally produced a Rontgen Ray picture. Unfortunately, the significance of their findings were overlooked, and the formal discovery of X-rays was credited to Wilhelm Roentgen in 1895. The discovery has since transformed the practice of medicine, and over the course of the past 130 years, the development of new radiological techniques has continued to grow. The impact has been seen in virtually every hospital in the world, from the routine use of Ultrasound for pregnancy scans, through to the diagnosis of complex medical issues such as brain tumours. More subtly, X-rays were also used in the discovery of DNA and in military combat, and their social influence through popular culture can be seen in cartoons, books, movies and art. Written by two radiologists who have a passion for the history of their field, The History of Radiology is a beautifully illustrated review of the remarkable developments within radiology and the scientists and pioneers who were involved. This engaging and authoritative history will appeal to a wide audience including medical students studying for the Diploma in the History of Medicine of the Society of Apothecaries (DHMSA), doctors, medical physicists, medical historians and radiographers.