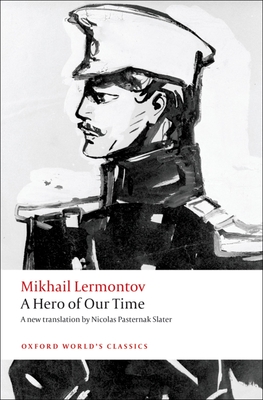 A Hero of Our Time (Oxford World's Classics)

After all that - how, you might wonder, could one not become a fatalist? Here is a fine new translation of the first great Russian novel, A Hero of Our Time, which brings tales of Romantic adventure to a new pitch of intensity and reflection. Lermontov's hero, Pechorin, is a young army officer posted to the Caucasus, where his adventures--amorous and reckless--do nothing to alleviate his boredom and cynicism. World-weary and self-destructive, Pechorin is yet is full of passion and romantic ardor, sensitive as well as arrogant. The episodic narrative transports the reader from the breathtaking terrain of the Caucasus to the genteel surroundings of spa resorts. Told in an engaging yet pointedly ironic style, the story expresses Lermontov's own estrangement from the stifling conventions of bourgeois society and the oppression of Russian autocracy, but it also captures a longing for freedom through acts of love and bravery. Andrew Kahn's introduction sheds light on the novel's relation to orientalism and the ethnographic and anthropological discourses of the day, and his informative notes illuminate a wide range of historical, literary, and geographical references. This new edition is the only one to include Pushkin's Journey to Arzrum, in which Pushkin describes his own experiences of Russia's military campaigns in the Caucasus, offering a fascinating counterpoint to Lermontov's novel. About the Series: For over 100 years Oxford World's Classics has made available the broadest spectrum of literature from around the globe. Each affordable volume reflects Oxford's commitment to scholarship, providing the most accurate text plus a wealth of other valuable features, including expert introductions by leading authorities, voluminous notes to clarify the text, up-to-date bibliographies for further study, and much more.

Nicolas Pasternak Slater has translated several works by Boris Pasternak, most recently The Family Correspondence, 1921-1960 (Hoover Press, 2010). Andrew Kahn has written widely on Russian literature. His books include The Cambridge Companion to Pushkin (2006) and Pushkin's Lyric Intelligence (OUP, 2008, pbk 2012). For Oxford World's Classics he has edited Pushkin's The Queen of Spades and Other Stories and Montesquieu's Persian Letters.
Loading...
or
Not Currently Available for Direct Purchase