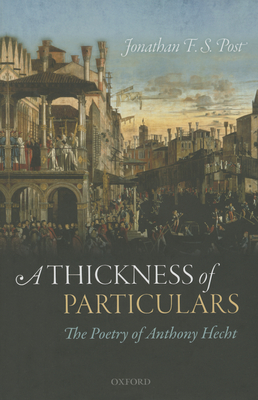 A Thickness of Particulars

The Poetry of Anthony Hecht

A Thickness of Particulars: The Poetry of Anthony Hecht is the first book-length study of one of the great formal poets of the later twentieth century (1923-2004). Making use of Hecht's correspondence, which the author edited, it situates Hecht's writings in the context of pre- and
post-World-War II verse, including poetry written by W. H. Auden, Elizabeth Bishop, Robert Lowell, James Merrill, and Richard Wilbur. In nine chapters, the book ranges over Hecht's full career, with special emphasis placed on the effects of the war on his memory; Hecht participated in the final push
by the Allied troops in Europe and was involved in the liberation of the Flossenburg Concentration Camp. The study explores the important place Venice and Italy occupied in his imagination as well as the significance of the visual and dramatic arts and music more generally. Chapters are devoted to
analyzing celebrated individual poems, such as The Book of Yolek and The Venetian Vespers; the making of particular volumes, as in the case of the Pulitzer-Prize-winning The Hard Hours; the poet's mid-career turn toward writing dramatic monologues and longer narrative poems (Green, An
Epistle, The Grapes, and See Naples and Die) and ekphrases; the inspiring use he made of Shakespeare, especially in A Love for Four Voices, his delightful riff on A Midsummer Night's Dream; and his collaboration with the artist Leonard Baskin in the Presumptions of Death series from
Flight Among the Tombs. The book seeks to unfold the itinerary of a highly civilized mind brooding, with wit, over the dark landscape of the later twentieth century in poems of unrivalled beauty.

Jonathan F. S. Post, Distinguished Professor of English, UCLA Jonathan Post is Distinguished Professor of English at UCLA and teaches and writes primarily on early modern and modern and contemporary poetry. He received his Ph.D. at the University of Rochester, studying primarily under Joseph Summers and Anthony Hecht. His interests include art, music, andliterature. He was Chair of the UCLA English Department from 1990-1993, and has served several times as interim dean of Humanities. He has held fellowships from the National Endowment of the Humanities, The Folger Shakespeare Library, The John Simon Guggenheim Memorial Foundation, and The BogliascoFoundation.
Loading...
or
Not Currently Available for Direct Purchase