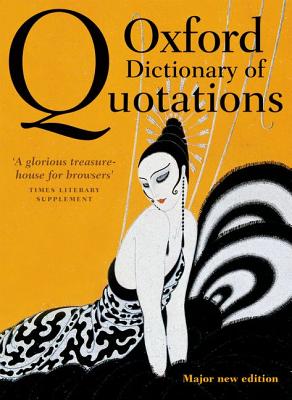 Ever since the first edition of the Oxford Dictionary of Quotations published over 70 years ago, this bestselling book has remained unrivalled in its coverage of quotations both past and present. The eighth edition is a vast treasury of wit and wisdom spanning the centuries and providing the ultimate answer to the question, 'Who said that?' Find that only half-remembered line in a collection of over 20,000 quotations, comprehensively indexed for ready reference. The Oxford Dictionary of Quotations provides a quote for every occasion that spans the greatest minds of history to the people who gave us one-liners. Drawing on Oxford's unrivalled dictionary research program and unique language monitoring, over 700 new quotations have been added to this eighth edition from authors ranging from St Joan of Arc and Coco Chanel to Albrecht Durer and Thomas Jefferson. New sayings that span the ages include "It would not be better if things happened to men just as they wish" (the classical writer Heraclitus), "My father used to say: "Don't raise your voice, improve your argument'"' (Desmond Tutu), and "The future is already here--it's just not evenly distributed" (the writer William Gibson). Two hundred authors make their debut in this edition, with a brand-new companion website that links to dozens of spoken quotations by the authors themselves.