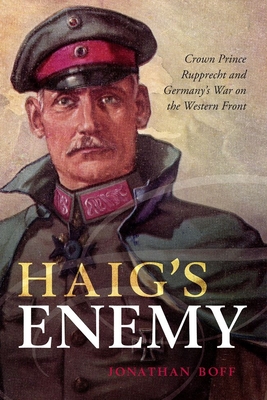 Crown Prince Rupprecht and Germany's War on the Western Front

During the First World War, the British army's most consistent German opponent was Crown Prince Rupprecht of Bavaria. Commanding more than a million men as a General, and then Field Marshal, in the Imperial German Army, he held off the attacks of the British Expeditionary Force under Sir John French and then Sir Douglas Haig for four long years. But Rupprecht was to lose not only the war, but his son and his throne. In Haig's Enemy, Jonathan Boff explores the tragic tale of Rupprecht's war--the story of a man caught under the wheels of modern industrial warfare. Providing a fresh viewpoint on the history of the Western Front, Boff draws on extensive research in the German archives to offer a history of the First World War from the other side of the barbed wire. He revises conventional explanations of why the Germans lost with an in-depth analysis of the nature of command, and of the institutional development of the British, French, and German armies as modern warfare was born. Using Rupprecht's own diaries and letters, many of them never before published, Haig's Enemy views the Great War through the eyes of one of Germany's leading generals, shedding new light on many of the controversies of the Western Front. The picture which emerges is far removed from the sterile stalemate of myth. Instead, Boff re-draws the Western Front as a highly dynamic battlespace, both physical and intellectual, where three armies struggled not only to out-fight, but also to out-think, their enemy. The consequences of falling behind in the race to adapt would be more terrible than ever imagined.

Jonathan Boff is a Senior Lecturer in History and War Studies at the University of Birmingham, where he teaches courses on conflict from Homer to Helmand. He specializes in the First World War and his previous book, Winning and Losing on the Western Front: The British Third Army and the Defeat of Germany in 1918 (CUP, 2012) was short-listed for the Templer Medal and for the British Army Book of the Year award. He was educated at Merton College, Oxford and the Department of War Studies, King's College London and spent twenty years working in finance before returning to academia. He serves on the councils of the National Army Museum and Army Records Society, has worked as a historical consultant with the British Army and the BBC, and is a Fellow of the Royal Historical Society.
Loading...
or support indie stores by buying on